The Board of Directors of Zordix AB (publ) (”Zordix” or the ”Company”) has today, in accordance with the share purchase agreement announced by press release on 27 May 2021, resolved on a set-off issue of 1,946,948 shares of series B, subject to subsequent approval by the next general meeting, directed to the sellers of Merge Games Ltd (“Merge Games”). Notice to the general meeting will be announced at a later date by separate press release.

Under the terms and conditions of the Merge Games acquisition agreement, which was announced by press release on 27 May 2021, the sellers of Merge Games are entitled to an earn-out based on the EBITDA performance for the 2021/2022 financial year.

The earn-out has been determined to approximately SEK 34.89 million. According to the share purchase agreement for Merge Games, 50 percent of the earn-out shall be paid in cash and 50 percent shall be paid in newly issued shares in the Company. The Board of Directors of Zordix has therefore resolved on a directed issue of 1,946,948 shares of series B, subject to subsequent approval by the general meeting, to the sellers of Merge Games. The reason for the deviation from the shareholders’ pre-emptive rights, is to enable payment of the earn-out in accordance with the terms of the share purchase agreement of Merge Games. The subscription price has been determined in accordance with the principles set out in the agreement with the sellers of Merge Games and amounts to SEK 8.96 per share, which corresponds to the volume weighted average price of the Company’s share for the last 20 trading days prior to the date of the resolution to issue the shares. The Board of Directors considers the price to be in line with market conditions.

Notice to the general meeting will be announced at a later date by separate press release. 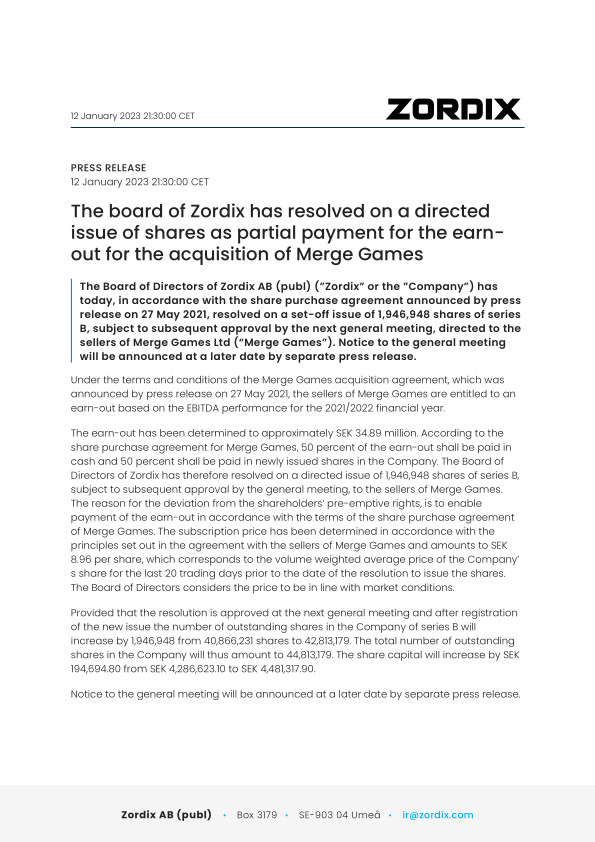