Umeå, Sweden (November 23, 2022) – Zordix AB (Publ)’s (Nasdaq: ZORDIX B) Net revenue for the quarter amounted to MSEK 258.6, a substantial increase from the corresponding period in 2021 driven by the acquisition of Maximum Games that took place in Q4 2021. On a proforma basis, the growth is 1.1%. EBITDA came in at MSEK 18.9, which is below the corresponding period in 2021 on a like-for-like basis due to a strong comparison period and a slowdown in the retail segment.

HIGHLIGHTS DURING THE THIRD QUARTER

SIGNIFICANT EVENTS AFTER THE END OF THE PERIOD

This report, together with previously published reports, is available on the Zordix webpage: https://zordix.com/ir/financial-reports/

This information is information that Zordix is obliged to make public pursuant to the EU Market Abuse Regulation. The information was submitted for publication, through the agency of the contact persons set out above, at 2022-11-23 08:30 CET. 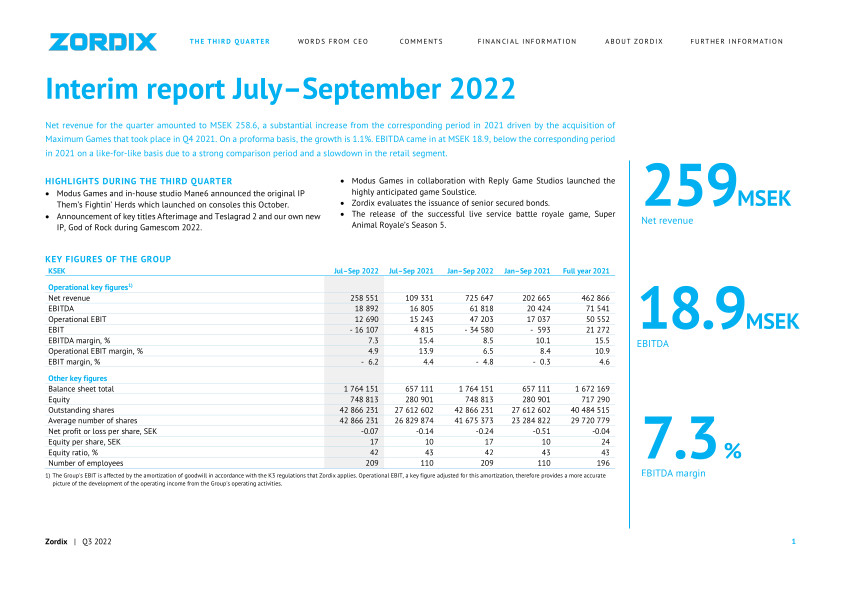