Zordix unleashes new announcements and game reveals, offering distinct experiences for a range of players with titles such as God of Rock, Teslagrad 2, Afterimage and Kukoos across a majority of consoles.

Umeå, Sweden. (August 31, 2022) – Swedish gaming group Zordix AB (publ) shared a suite of exciting announcements during the week of Gamescom 2022. The whole of four brand-new games were unveiled during the Future Games Show: God of Rock, Afterimage, Teslagrad 2 and Kukoos – Lost Pets, plus a new trailer for the dark fantasy action title Soulstice, which has additionally just launched a free public demo on Steam.

“We couldn’t be more thrilled to be back in person at Gamescom again, to show our phenomenal lineup and share progress on the exciting games being developed in-house,” said Christina Seelye, CEO of Zordix. “The collective work happening at Zordix has set us up for an incredibly strong second half of the year and beyond.”

God of Rock (2023 | PC, Switch, Xbox One, Xbox X|S, PlayStation 4/5 | Modus Studios)
A new fighting game has been revealed by Modus Games and Modus Studios that promises to propel the genre forward. God of Rock pushes players to their limit, forcing them to fight in tune with a song decided by the characters and stage selected. Check out the new trailer to see if you’re ready for a musical battle that will resonate through the ages: https://youtu.be/yRAww8VRcBU

Teslagrad 2 (Spring 2023 | PC, Switch, Xbox One, Xbox X|S, PlayStation 4/5 | Rain Games)
Modus Games and Rain Games debuted the first trailer from Teslagrad 2, a long-awaited sequel to the multimillion-selling puzzle-adventure hit Teslagrad. Use your magical powers to explore a vast, mysterious world and fend off forgotten enemies lurking in the shadows. With a plethora of abilities at your disposal, players will be pushed to experiment and forge their escape from a dangerous, uncharted land. Dive into the magnetic world of Teslagrad 2: https://www.youtube.com/watch?v=34DUvETet9M

Kukoos – Lost Pets (2022 | PC, Switch, Xbox One, Xbox X|S, PlayStation 4/5 | PetitFabrik)
Modus Games unveiled Kukoos – Lost Pets, a quirky 3D platformer coming to you from developer PetitFabrik. Kukoos – Lost Pets tasks its bravest adventurers with exploring five diverse worlds to save the adorable animal inhabitants of the Kukoo Tree. Bumble your way through high-tech cities, forests, and ancient temples as you discover what has brainwashed these precious pets. Check out the new trailer for this adventure for all ages here: https://www.youtube.com/watch?v=bF-gpmMGG_8

Soulstice (Sept. 20, 2022 | PC, Xbox X|S, PlayStation®5 | Reply Game Studios)
From Modus Games and Reply Game Studios, players can experience the striking dark fantasy action title, Soulstice firsthand with a new playable demo on Steam for PC. Control soul-bound sisters Briar and Lute, who have been reborn as a Chimera, the ultimate weapon of a mysterious Order. Instructed to investigate a Tear in the sky above the city of Ilden, the duo must fight through a twisted and devastated land to save humankind. Download the demo on Steam now, and join their fight: https://store.steampowered.com/app/1602080/Soulstice/

Bramble: The Mountain King (PC and console during 2023)
Revealed by Merge Games and Dimfrost Studio, the grim adventure Bramble: The Mountain King marks the first in-house publishing deal for Zordix. Bramble draws on the powerful creatures and rich fables of Nordic mythology to spin a unique tale of one boy’s courage in the face of impossible dangers. See the latest Bramble trailer here:
https://youtu.be/I-Kb0qX97CA

Merge Games also presented Smalland, SunnySide and Pixelshire at the show. With everything from the dark, looming forests of Nordic myth to the not-so-simple life of a small, rural farming town in Japan, you can check out Merge’s eclectic upcoming titles in their latest sizzle reel: https://youtu.be/LdZBBQqMME4 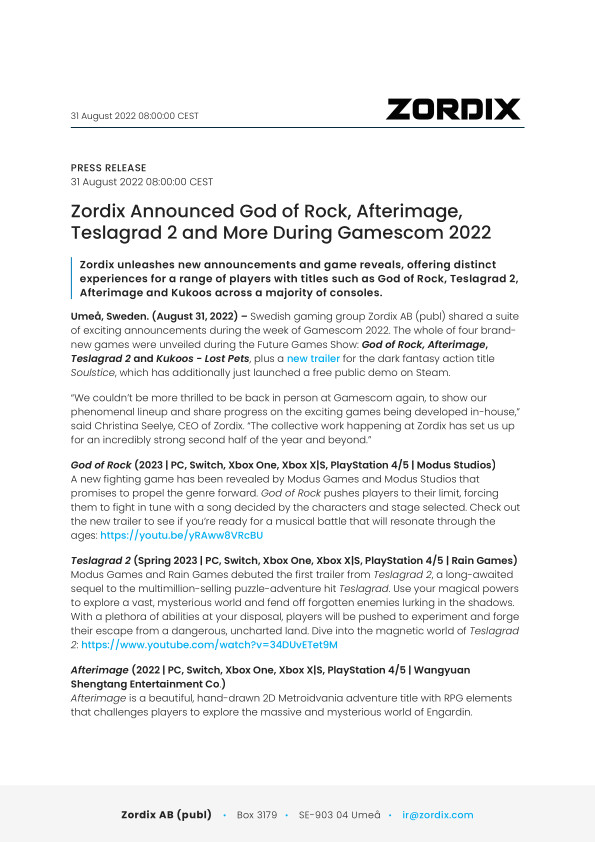