Walnut Creek, California, USA (Aug. 18, 2022) – Zordix publisher Modus Games and inhouse studio Mane6 today announced that own IP fighting game Them’s Fightin’ Herds will be bringing its cast of adorable four-legged fighters to PlayStation 4, PlayStation 5, Xbox One, Xbox Series X|S and Nintendo Switch on October 18. The news was unveiled alongside a new trailer showcasing all the characters in the base roster.

Pre-orders for Them’s Fightin’ Herds are available now from retailers or directly on the Maximum Games Store. The Deluxe Edition, which includes the Season 1 Pass, will give players access to four additional playable characters, four unique stages, four exclusive Pixel Lobby accessories and a gorgeous new palette pack for each character, here: https://store.maximumgames.com/products/thems-fightin-herds-deluxe-edition

About Mane6
Mane6 was founded by a group of friends with big ambitions and has maintained excellence in the indie fighting game space for over 10 years. With a relentless dedication to quality and uncompromised love of animation, this group of seasoned developers are bringing their talents to the cutting edge of what's possible in the genre. Learn more at www.mane6.com. 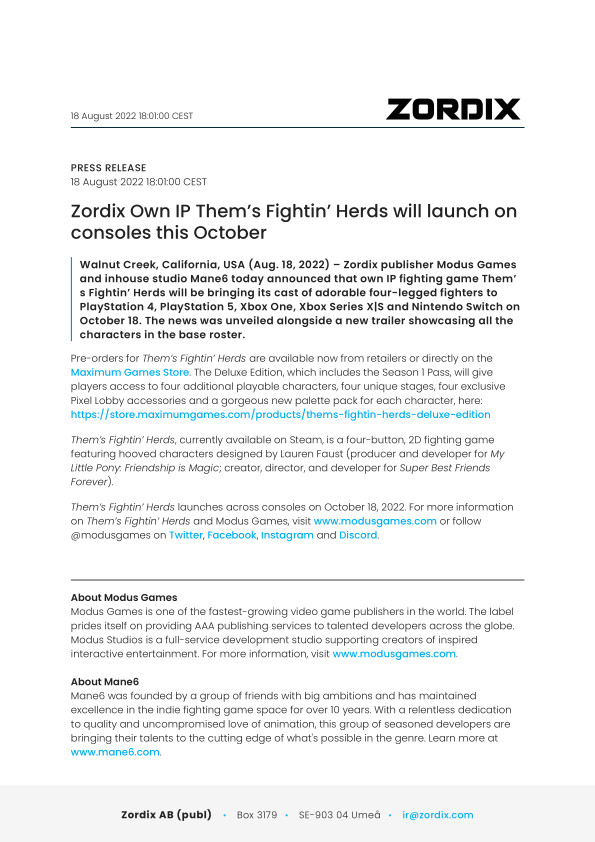