Physical pre-orders available now for Deluxe console editions, with a newly announced Season 1 Pass on the way for all platforms

Alongside this announcement, Modus Games today revealed that more content is on the way in the form of a Season 1 Pass featuring four brand-new DLC fighters, stages, and cosmetics. The Season 1 Pass will be included in the Deluxe Edition or as a separate digital upgrade when it releases later this year on PC and console. Pre-order the physical version coming this fall from the Maximum Games Store now: https://eu-store.maximumgames.com/products/thems-fightin-herds-deluxe-edition

About Modus Games
Modus Games is one of the fastest-growing video game publishers in the world. The label prides itself on providing AAA publishing services to talented developers across the globe. Modus Studios is a full-service development studio supporting creators of inspired interactive entertainment. For more information, visit www.modusgames.com

About Mane6
Mane6 was founded by a group of friends with big ambitions and has maintained excellence in the indie fighting game space for over 10 years. With a relentless dedication to quality and uncompromised love of animation, this group of seasoned developers are bringing their talents to the cutting edge of what's possible in the genre. Learn more at www.mane6.com. 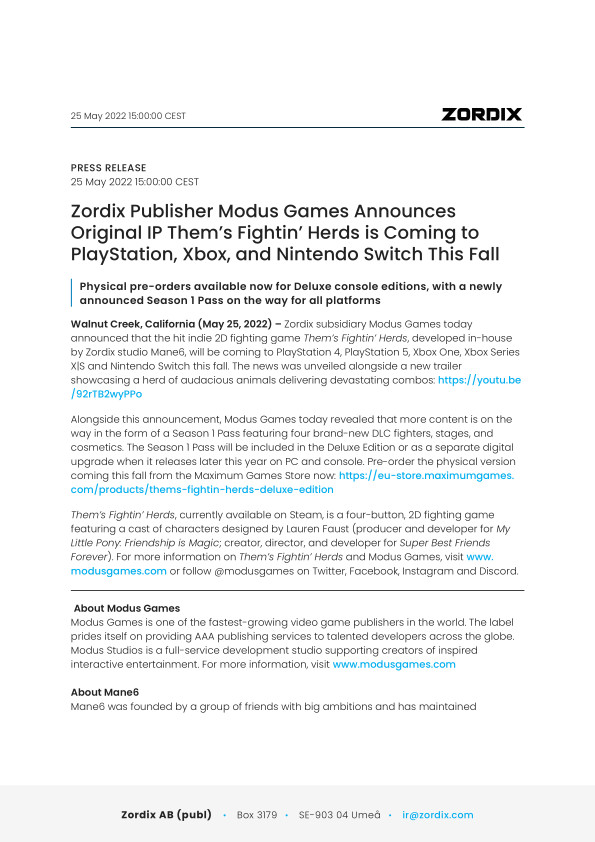